Lets celebrate a decades worth of Underwood and Paisley's excellent hosting skills! 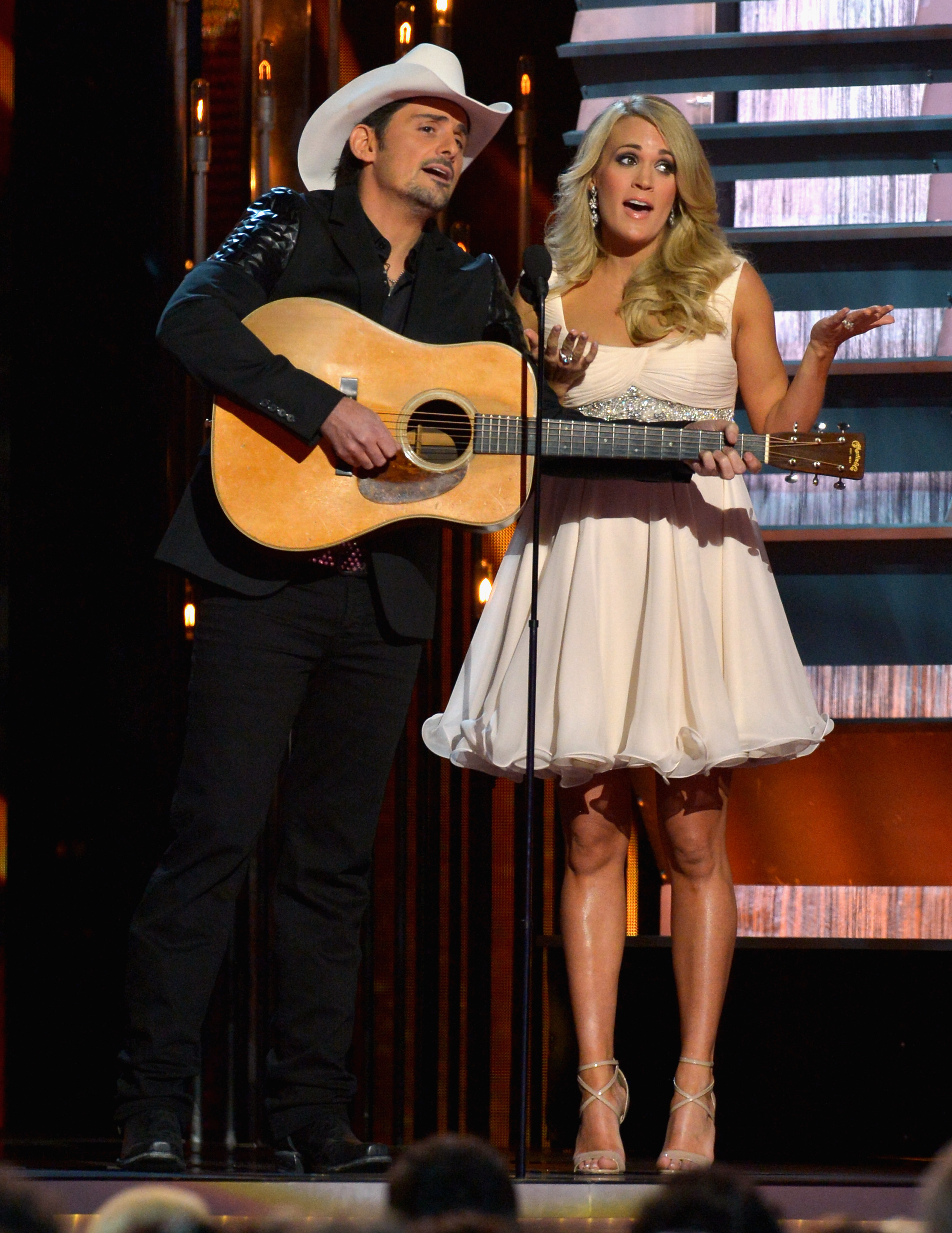 There’s no doubt, the holiday season is in full swing. With the November chill setting in across most of the country, and excitement building for the seasons hallmark holidays, Thanksgiving, Christmas, the New Year and of course, the CMA Awards!

A bona fide country music tradition, officially a decade strong, is the yearly partnership of Brad Paisley and Carrie Underwood to host the Country Music Association’s annual award show. As one of the industry’s biggest nights, the hosts are given an immense amount of responsibility, and year after year Underwood and Paisley prove themselves to be just the duo for the job.

Taking over for Brooks & Dunn, who hosted the ceremonies from 2004 through 2006, after positive reviews of their amplified roles in the production in 2007, they were officially named co-hosts in 2008. This is also the year that the event moved from Madison Square Garden in New York City to the Bridgestone Arena in Nashville, Tennessee. The commercials that ran promotion for the 2007 Awards show a burgeoning career for the future co-hosts that would result in their faces becoming synonymous with the function.

Fun fact, for the second year in a row, co-host Carrie Underwood was the winner of the Female Vocalist of the Year Award, a title she would hold for 3 years straight through 2008. Her co-host took home a few awards in 2006 and 2007 as well, winning album of the year for Time Well Wasted and Musical Event of the Year for “Where I Ge Where I’m Going,” a gorgeous collaboration with icon Dolly Parton, all before taking home more awards in 2007. This year both co-hosts won vocalist of the year in their respective categories, with Underwood taking home Single of the Year for “Before He Cheats” and Paisley took Music Video of the Year for the hilarious accompaniment to “Online.”

Coming off raving reviews of their onstage chemistry, strong senses of humor and engaging hosting talents, the two artists were excited to return to the CMA stage in 2008. Both leaders of the genre, the Male and Female Vocalists of the Year at this very award show, fans couldn’t get enough of seeing a different side of their favorite artists. At this point, the value the hosting pair brought to the show was obvious, and the promotions reflect that. One of the more fun initiatives was a Q&A the CMA posted, videos with each host individually that turned out to be an awesome visual time capsule. Combined with that promo video, you’ll find all the 2000’s fashion you’ve been missing. Co-host Paisley received another nod to his music video style, taking home Music Video of the Year for “Waitin’ on a Woman.”

By the time the awards had finished airing, Underwood and Paisley were as synonymous with CMA as the words country music or award themselves. Having solidified their position as the co-hosts for the foreseeable future, they began to really grow into their roles. In a recap CMT published of the awards that year, the author praised their performance specifically, writing “Brad and Carrie, if I had an awards show, I’d hire you guys to host. I’ve been watching these shows since the ’70s, and nobody did better than you.” With Paisley managing to maintain the title of Male Vocalist of the Year, the two co-hosts had officially each held that respective title for three consecutive years, not bad. His “Start a Band” performance with Keith Urban earned them the Musical Event of the Year Award, his second of the night. And that’s not to mention the jaw-dropping performances each artist pulled off alongside their hosting duties.

Each is too intricate and impressive for words, watch for yourself below:

New decade, new title for host Brad Paisley, “promoted” if you will, to Entertainer of the Year at the 2010 Awards, it’s safe to say he was having a great year. Having been nominated five times prior, it was exciting for fans everywhere to see him finally take home the award. Having become close friends from years of show preparation, the hosting duo’s rapport only improved. From hilarious commercials featuring the artists and hosts playing air hockey backstage, practicing lines and a comedic sketch starring a very snobby Paisley enjoying lobster claw, it’s clear to see how much fun they have not only hosting, but promoting the show.

Back again with a truly hilarious comedy sketch intended to promote the show, featuring a number of hilarious characters including Miss Piggy, Minnie and Mickey Mouse, ventriloquists and mimes, they joke they’ve been made by ABC to audition for their hosting jobs. Watch both the final product and some fun behind the scenes footage below. And bonus, ABC World News did an awesome recap of the year’s awards, with really fun footage and a few facts, you can watch in full as well. This was also the year that the co-hosts released their hit duet, “Remind Me.”

By the 5-year anniversary of the pairs selection as co-hosts, their act had become an event in of itself. Always ones to keep their dialogue relevant, there was even reference to viral sensation of the time “Gangam Style” and both busted out some dance moves to accompany it. In a performance of hit single “Blown Away” that had the crowd literally blown away, Underwood once again proved herself the hostess with the mostest, the most stage presence that is.

In a reveal video that features mega group and friends of theirs, Little Big Town, Underwood and Paisley were announced as the hosts for a sixth consecutive year. In an interview with ABC news, the two stars shared their pre-show rituals, and even play a fun game titled “Co-Host Connection” running through some of the best memories they made over their 5 consecutive years as hosts. The entire video is so fun, it’s worth every single one of the six minutes of your time.

One of the most memorable moments in their careers as co-hosts, the show was promoted with a few videos featuring mini versions of Paisley and Underwood, two children dressed to look like their adult counterparts. The promo videos even had a clip of the mini-me’s discussing what they want to be when they grow up—CMA Awards hosts of course! The series of clips including an array of antics in the mini-hosts lives, and they’re all so funny and adorable, definitely worth watching. Another great promotional tool, the trivia game show that friends Little Big Town returned to host.

With seven years of experience under their belt, Paisley and Underwood returned to the CMA stage, now very comfortable in their co-host duties. Never one to skip a performance, this year Underwood belted her hit single “Smoke Break” brandishing an electric guitar. Now as much an attraction to the program as the awards themselves, Underwood and Paisley had fine-tuned their comedic timing over nearly a decade sharing the role. The commercials are reflective how much value the hosting pair has for the entire operation, check em out below.

Half a Century of Country Music Celebration, 50th CMA Awards (2016)

In celebration of a remarkable fifty years of CMA Award shows, the music community came together for a night of jaw-dropping performances, tributes, and surprise guests. True to form, co-host Underwood performed her hit “Dirty Laundry,” but the true star of the night was not the hosts or the artists this year, it was country music, an honoree the community gladly bowed in their heads in respect to. Stars from across the American musical spectrum teamed up, including Texas natives The Dixie Chicks, and worldwide superstar Beyoncé. Taylor Swift even returned to present the Entertainer of the Year Award!

Ten years, an entire decade of hosting a nationally televised award show, calls for one big time celebration. However, times of hardship had a hold on the country, and the hosts began the show with a dedication to the victims of the Las Vegas and Sutherland Springs shootings. They did manage to brighten the mood, even sporting those infamous solar eclipse glasses worn during the event that previous August. The seasoned veterans were clearly in their stride, navigating the previous years’ hardship and happiness with mindfulness and a healthy sense of humor.

Coming off an incredible ten straight years of hosting success, fans nationwide are looking forward to the duos eleventh joint CMA performance. Over the years, this event has become a marker in time throughout the year, almost an introduction to the holiday season. Always brave enough to incorporate the latest pop culture sensations into their monologues, and with lots of material having been generated in the country community over the past year, we can’t wait to see what they’ve come up with.