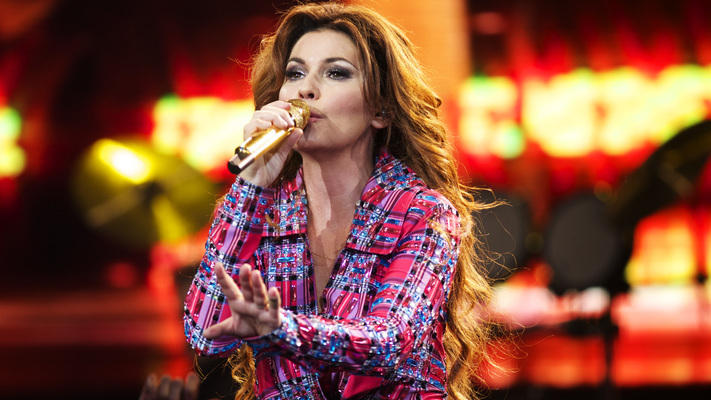 Shania Twain was born Eilleen Regina Edwards on August 28, 1965 in Windsor, Ontario, Canada. After her parents divorced when she was still young, her mother remarried Jerry Twain, who adopted Eilleen and her sisters, becoming Eilleen Twain. Twain grew up in the small town of Timmins, located in Ontario, Canada. Between her family often struggling to make ends meet and an abusive stepfather, music was a bright spot in Twain's childhood. She started writing songs by the time she was 10 years old and performing at community events and clubs/bars, where she would earn money to help support her family. At 18 Twain pursued music full-time in Toronto, but didn't make enough to support herself without taking odd jobs. Tragedy struck in 1987 when her mother and stepfather were in a fatal car accident, taking both of their lives. Twain moved back home to help support her younger siblings, (a younger sister, a younger brother from her mother and stepfather's marriage and her stepfather's adopted nephew) and took a job singing in a Las Vegas-style show at the nearby Deerhurst resort in Huntsville, Ontario. She hadn't given up on creating her own music though, after her siblings were old enough and out on their own, Twain continued to write songs and work on music.

Twain's big industry break came when her manager lined up a showcase for her in Nashville, Tennessee to perform in front of major label record executives. After catching the attention of several labels, Twain was signed to Polygram Records (which ultimately became Mercury Nashville) where she changed her name to Shania Twain shortly thereafter. Shania Twain released her self-titled debut album in 1993, grabbing the attention of music producer and now ex-husband, Robert John "Mutt" Lange. After little success with her debut album, Shania and Robert got to work on her sophomore album, penning 10 of the 12 tracks together. Her follow-up album The Woman in Me was released in 1995 and spawned 12 singles including the iconic hit "Any Man of Mine." In 1997 Shania released her third studio album Come On Over, the album would go on to sell over 40 million records worldwide and become the bestselling country album of all time, solidifying Twain's place in music history. Shania would follow up the success of Come On Over with her fourth studio album, Up!, in 2003 which spawned the mega-hit "Forever and For Always" and a hugely successful world tour. After a greatest hits compilation with new music was released in 2004, Twain took a much needed break and despite several song contributions to various projects, she would not return to the spotlight until 2011 with the release of a new single titled "Today Is Your Day" and the Vegas residency, 'Why Not? with Shania Twain.' The Vegas residency proved to be a hit prepared Twain for her 2015 Rock This Country Tour. In September of 2017 Twain released her first new studio album since 2002! With the release of her new album NOW, Shania announced the Now World Tour which is set to run through December 22, 2018.