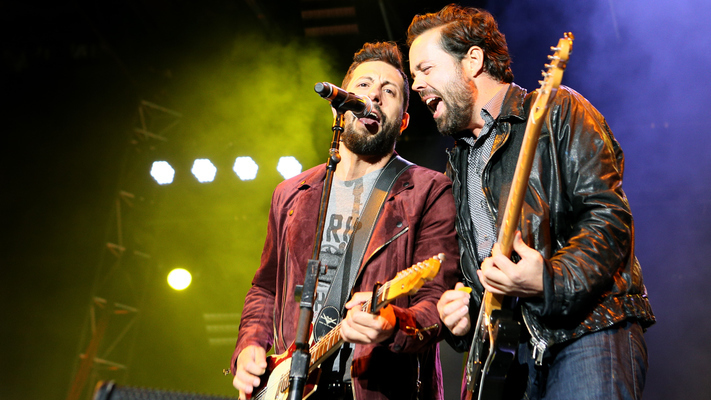 Old Dominion – also a nickname for the state of Virginia, consists of Matthew Ramsey on vocals, Geoff Spring on bass guitar, Brad Tursi on guitar, Whit Sellers on drums and Trevor Rosen on vocals, keyboards, guitar. Crossing paths in Nashville in 2003, Ramsey and Rosen are considered the “original” members of Old Dominion. While Sellers and Ramsey’s history dates back to middle school, Sellers met Tursi and Sprung at James Madison University. The band officially formed in Nashville in 2007 with Tursi later joining in 2012.  With four of the five members having roots in Virginia­ – Rosen hails from the state of Michigan, Old Dominion was a fitting band name.

During their formative years, the guys lived and breathed country music, working on side projects day and night. Honing their skills, members of the band individually and collectively have penned an astounding number of hits for other artists including Luke Bryan, Cole Swindell, Kenny Chesney, The Band Perry, Kelsea Ballerini, Blake Shelton and Chris Young to name a few. After their first self-released EP in 2012, the band worked with producer Shane McAnally on the follow-up. The band released their self-titled EP on October 7, 2014 which spawned their first radio hit, “Break Up with Him.” The popularity of the single led to a record deal with RCA Nashville in late February of 2015. Their debut album Meat and Candy was released on November 6, 2015 and hit No. 3 on the Billboard Top Country Albums chart, featuring the hits “Snapback” and “Song for Another Time.”  Their sophomore major label release Happy Endings came out on August 25, 2017 and peaked at No. 1 on the Billboard Top Country Albums chart, solidifying their impact on the country music scene. Happy Endings would go to produce the hit singles “No Such Thing as a Broken Heart” and “Written In the Sand,” both reaching No. 1 on the US Country Airplay charts. Old Dominion joined Kenny Chesney as tour support in 2018 for Chesney’s highly anticipated Trip Around The Sun Tour.