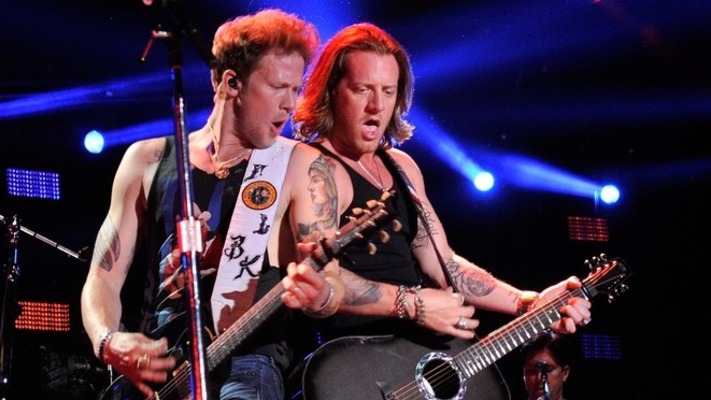 Florida Georgia Line is comprised of Brian Kelley from Ormond Beach, Florida and Tyler Hubbard from Monroe, Georgia, hence their band name. The duo first crossed paths in 2008 when they met at Belmont University though a campus worship group. After graduation, the guys moved in together and gave themselves two years to succeed as a country duo, taking odd jobs to pay the bills while recording and playing local gigs on the weekends.

Florida Georgia Line independently recorded and digitally distributed their first EP, Anything Like Me in 2010 before being discovered by Nickelback producer Joey Moi while playing a show at a county fair. Working with Moi, they readied their second EP, It'z Just What We Do, and released it on May 15, 2012 featuring their breakout single "Cruise." "Cruise" was first played on the satellite radio station 'The Highway' which helped boost strong iTunes sales before catching the attention of major labels leading to a deal with Republic Nashville and Big Machine Label Group. Florida Georgia Line's first studio album Here's To The Good Times was released on December 4, 2012, going on to become the sixth best-selling album of 2013. A remix of "Cruise" featuring rapper Nelly reached No. 4 on the Billboard Hot 100 chart and set a then record with 24 weeks at No. 1 on Billboard's Hot Country Songs chart. The duo released their sophomore studio album Anything Goes on October 14, 2014 and featured the lead single "Dirt," which would become their sixth consecutive single to hit top five on the Billboard Hot Country Songs chart. On August 29, 2016 they released their third studio album Dig Your Roots which included music features with superstar acts Tim McGraw, Ziggy Marley and the Backstreet Boys. Most recently, the guys have proven their star power with feature collaborations on tracks by some of pop music's biggest names including The Chainsmokers and Bebe Rexha.