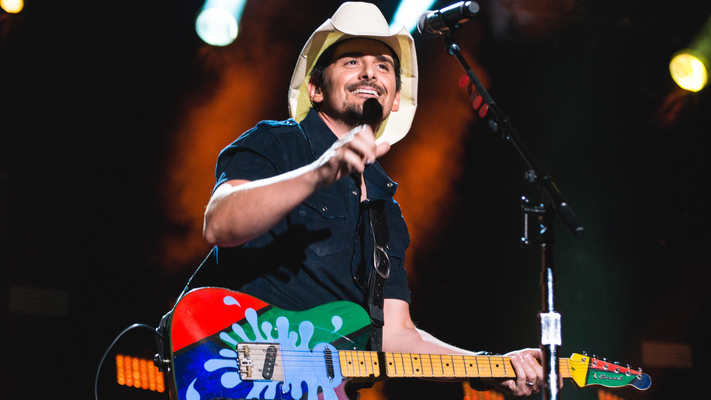 Brad Paisley's rise to country music stardom was in full effect at the early age of 8-years-old when his grandfather gifted him his first guitar. At the age of 10, Paisley had his first public performance at his local church. As a teenager, Paisley wrote his first song, "Born on Christmas Day" and formed his first band, "Brad Paisley and the C-Notes." Paisley received praise from local radio station programmer, Tom Miller, who asked if he would perform on the show, Jamboree USA. He had an eight-year long residency at the station as an opener for various country artists ranging from The Judds to George Jones. Brad Paisley also has an educational music background under his belt after earning a Bachelor's degree in Business Administration from the Mike Curb School of Music Business.

Brad Paisley has released 10 studio albums, with his first being Who Needs Pictures, released in 1999, and his most recent being Love and War, released in 2017. Paisley has achieved record album sales of over 11 million copies. He has a plethora of Country Music Awards and Country Music Association Awards. Paisley has even earned himself two American Music Awards and three Grammy Awards. All of his albums are certified gold or higher, and he has 19 number 1 singles on the US Billboard Country Airplay Chart. He was inducted into the Grand Ole Opry at the age of 28, making him the youngest member to ever join. Paisley has been involved in the country music scene for over a decade providing his vast discography that has earned him a noteworthy amount of awards. Brad Paisley has set the bar very high for country music stars everywhere.