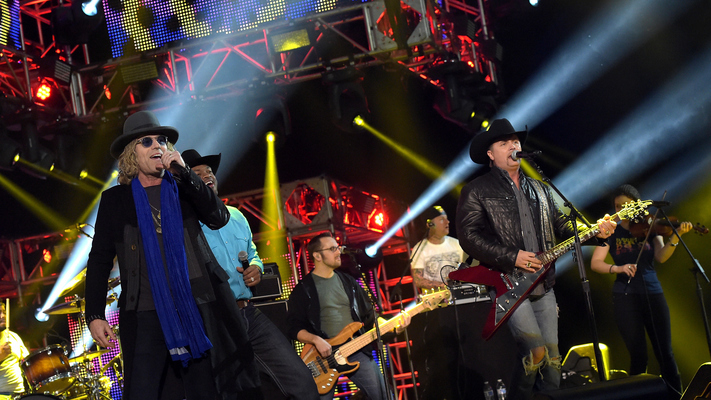 Between Raising Hell and Amazing Grace (2007)

William Kenneth Alphin, better known as Big Kenny truly lived the southern country lifestyle before making it big in the music industry. Virginia native, Kenny grew up on his family’s farm along with his three older siblings and parents. Kenny first began singing at a young age, taking lessons from his mother who was the local church choir director. In addition to music, Kenny was always a caring philanthropist, even helping build a local volunteer fire station where he served as an EMT and firefighter through high school. After school, Kenny worked as a furniture and farm builder until finally deciding he wanted a fresh start. Driven by his passion for music, Kenny moved to Nashville, Tennessee to see if he could turn his passion into a career.

Similar to Big Kenny, creative partner John Rich grew up with a tremendous love and appreciation for country music. Though he was born in Dickinson, Tennessee, Rich spent the majority of his childhood in west Texas. Though now extremely successful, life was not always easy for Rich. Rich spent his childhood in a trailer park going to food banks and spending whatever money he had on country music CD’s. Starting at a young age, John dreamed of becoming a country music star and one day playing at the Grand Ole Opry. After school, John packed up and moved to Nashville where he worked at an amusement park in order to make ends-meat.

Today, the duo has come a long way from where they started, but their music never fails to tell the honest stories of their humble upbringings that country music fans crave. After pursuing their own solo careers and collaborations with other artists, Kenny and John decided to partner with one another and released their first album Horse of a Different Color in 2004. The two knew they were bound for success when this album produced 4 top 40 hits including number 11 on the charts Save a Horse Ride a Cowboy. Since their start, the duo has released 6 chart topping albums. Their hit song Comin to Your City was altered and used as an opening by ESPN’s Saturday program College Gameday and shortly after, they released Between Raising Hell and Amazing Grace which hit number one on the country music charts and stayed there for two weeks. They have been nominated for 2 CMA Awards, 4 ACM Awards, a Grammy, and have won a Billboard Music Award and a Ride of Fame Award. Big & Rich is regarded as one of the biggest duo’s in today’s country music sphere and is continuing to tour and release new music today.